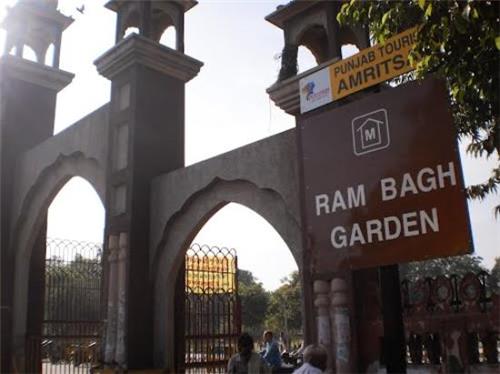 Ram Bagh Garden is located on Queen’s Road in the northern part of Amritsar. If you are travelling by auto rickshaws, it will take around fifteen minutes to reach this place from the world famous Golden Temple. It was once the summer palace of Maharaja Ranjit Singh ji.  Today, it is one of the popular tourist spots in the city.

Maharaja Ranjit Singh ji started his conquests by capturing Lahore on 7th July 1799 and conquered Amritsar in 1802.  Although his capital was located at Lahore he spent considerable time in Amritsar, especially in summer.

In the beginning, the Maharaja used to stay at Gobindgarh Fort located near Lahori Gate.  He had it renovated and enlarged in 1809. Later in 1818, he constructed a garden in the northern part of the city and named it after the fourth Sikh Guru, Guru Ram Das Ji. Consequently, the garden began to be known as Ram Bagh, bagh being the Punjabi word for garden. A two-storied house located in the middle of this garden became his summer palace.

However, many are of the opinion that a garden known as Company Garden preexisted at this very spot. Maharaja Ranjit Singh ji had it renovated and renamed. Nonetheless, it took almost 13 years to complete the whole project. 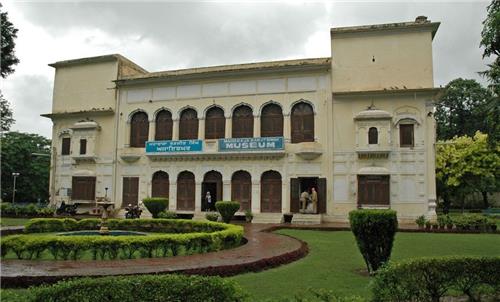 Ram Bagh was modeled after the Shalimar Garden constructed in Lahore by Emperor Shah Jahan. It was completed in 1831 and thereafter used as the residence of Maharaja Ranjit Singh ji during his stay at Amritsar. The whole project was spread over an area of 84 acres and was built at the cost one lakh twenty five thousand Nanaksahi rupees. The Maharaja had many rare trees and shrubs planted in this garden.

The main palace was constructed in the middle of this garden. It consisted of a basement and two storeys.  It also had an inbuilt cooling mechanism. Whenever the Maharaja was in town he lived here. Close to the palace was a swimming pool, designed especially for the ladies.

The complex also had smaller palaces constructed on the three sides of the main palace; these were probably built as residences for the trusted Sardars who always accompanied Ranjit Singh ji. A little away were smaller ones. These were possibly guest houses meant for those chieftains, who often came to visit him. There were also few Baradaris within the complex. These houses with twelve (bara) doors (dari) were small but beautiful. In all, the garden gave the impression of a beautiful and well planned structure and in later years served as an inspiration for many noblemen.

However, the Maharaja was equally conscious about the political condition of that era and therefore took every measure to protect it from enemy onslaught. He had the garden enclosed by a fourteen feet high masonry wall. There were also four ornamental watch towers, locally known as Burj, located on all four corners. Rampant for guns were constructed on the wall to ward off any attack. Outside this brick wall was a thick mud wall surrounded by a moat.

To enter this palace, one had to cross two gates; one built in the outer mud wall and the other in the brick wall.  There was also a third gate known as the Ram Bagh Gate; one had to cross this gate if one wanted to reach the Palace from the city. The road connecting these two gates was lined with trees. 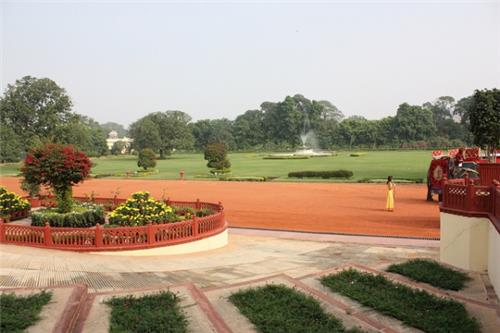 Today Ram Bagh is not only a must-see place for the tourists, but also a favorite place for the locals. The ambience is quiet and peaceful; therefore many people come here for their morning or evening walk. There is also a motley crowd in the weekend enjoying some quality time.

Indeed, this well maintained garden is a pleasure to the eyes. If you are in season, you may find different kinds of flowers in bloom. Fountains and water channels with different kinds of fishes in them adds to its attraction. A statue of the great king saddled on the horseback has been erected at one end of the garden. You should also look for the fortified gate that was built to protect he palace from enemy assault; it now stands at another end of the garden. 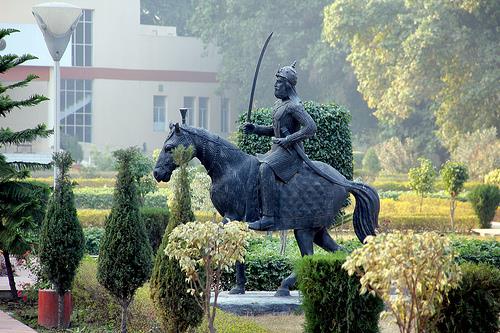 While going round the garden, you may also come across some horses and mules; many people bring fruits like apples for them and watch them relishing those.

1977 was the 400th anniversary of the city of Amritsar and to commemorate the event, Maharaja Ranjit Singh ji’s palace was transformed into a museum. It is now open to public. In the museum you can see rare collections of painting, manuscripts, weapons, armors as well as coins belonging to the eighteenth and nineteenth century. In addition, there is also a replica of the famous Kohinoor diamond preserved in this museum. 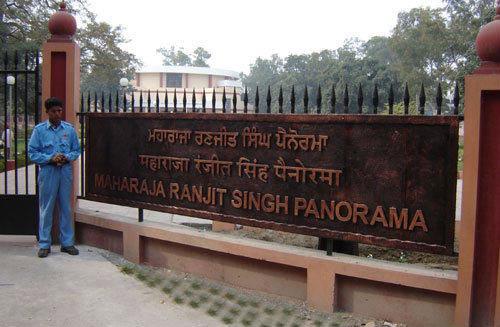 Apart from that, there is also a panorama of Maharaja Ranjit Singh ji located in the garden.  It depicts the major battles in the life of the king through three-dimensional montages. Foreground diorama coupled with battle field sound effects intensifies the level of experience for the viewers. The twelve meter tall and hundred meters long panoramic painting of the king is truly mesmerizing.  This project has been sponsored jointly by the State Government of Punjab and the National Council of Science and Museums. One should take time to visit that as well.