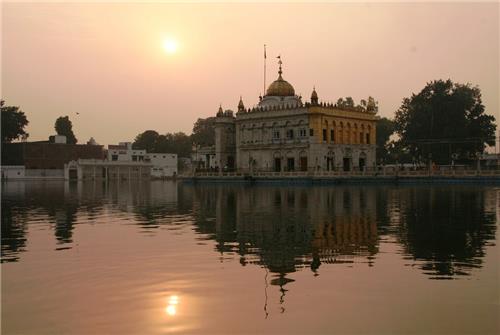 We all know that the city of Amritsar, built by Guru Ram Dev in the end of the sixteenth century, is the religious as well as cultural center for the Sikh religion.  However, few are aware of the fact that this town is equally important for the Hindus.


The Hindu Connection of Durgiana Temple

It is believed that in olden days King Ishkvaku of Surya Vangsh performed many sacrifices at this place. In addition, Valmiki Ashram, where he composed greater part of the Ramayana, is located close by. It is where Sita spent her last days and brought up her two sons Lov and Kush.
The Great War between Lov-Kush and the army of Lord Rama, in which the later was defeated, also took place here. Therefore, Amritsar also has special significance for the Hindus and the Shri Durgiana Temple is the epicenter of all their religious and cultural activities.

It is to be noted that that the Durgiana temple is actually known as Shree Durgiana Tirath. It is located near Hati Gate in Gole Bagh area. Amritsar Railway Station is located just a few yards from it. The main Bus Stand is around 1.5 km from here. Therefore, it is easily approachable by road and rail.  Devotees can avail free food, which is hygienic and tasty at the same time, from the temple.

Shri Durgiana Tirath is the brainchild of Guru Harshai Mal Kappor, an eminent personality in those days.  You may see his statue just opposite to the Darshani Deori. Appeal for donations was made by Pandit Madan Mohan Malviya, Guru Harshai Mal Kapoor and Sh. Nathu Mal Rang Wale.  Very soon the required amount was collected.  Ultimately, the foundation stone of the temple was laid down in 1925 by Pandit Madan Mohan Malviya.

The Durgiana Tirath consists of a cluster of temples dedicated to different deities. The main temple follows the architectural pattern of the Golden Temple. A water tank or Sarovar is one of the prime attractions of this temple.
Although the complex was built in the beginning of the twentieth century, some of the temples, especially the Shitla Mandir is much older. It is believed Sita used to come to this temple every day and offer puja; from here Valmiki’s Ashram is only 4 km as the crow flies. Therefore, we can say that the roots of this temple complex lie in the antiquity.


The Entrance of Shri Durgiana Tirath 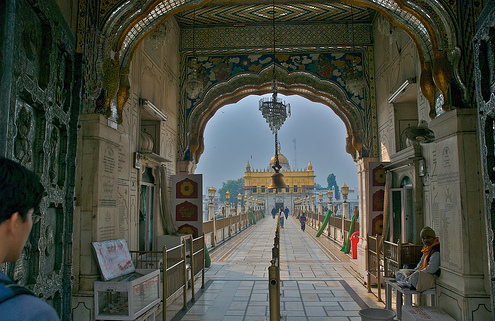 The main gate of Shri Durgiana Tirath is made up of pure silver. It measures around 12 ft by 12 ft. It is because of this gate the complex is also known as Silver Temple. On entering the temple you first come across the Darshani Deori. Opposite to it you see the statue of Guru Harshai Mal Kapoor. It has been made in meditating posture. It faces the main temple. On the left side of the Deori is the idol of Durga Mata. On the right you have the idol of Lord Ganesha. Before entering the main temple the devotees seek the blessings of Mata Durga and Lord Ganesha.


Durgiana Temple From Inside 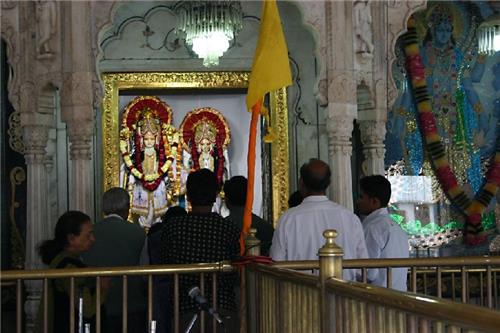 The main temple at Durgiana Tirath is that of Shri Lakshmi Narayan. It is situated in the middle of the sarovar, which is around 528 ft wide and 18 to 20 ft deep. The water of this tank has some medicinal value and hence is compared to ‘Amrit’.  The temple can be approached through an 18.5 m long bridge.

From the bridge you can see the idol of Laksmi Narayan; it is in standing position. The whole atmosphere is so serene that you are compelled to stop for some time. On the left side of the temple is Ram Darbar and on the right you find Lord Krishna along with Radha and Govardhan Maharaj.  Behind the temple is Harki pori. Here you have the idol of Lord Shiva in a meditating posture. It is flanked by idols of Lord Krishna and Balaram on one side and Ved Vyash on the other. There is also a temple of Garuda, the Bahana of Lord Vishnu.

This temple complex has nine gates made out of silver. There is also kitchen where food is cooked for the deities. However, it is out of bound for visitors and only the authorized persons are allowed in. When the place is lighted at night, it becomes truly fascinating.

This temple is located in the north west of the main Lakshmi Narayan Mandir. According to Ramayana, during the war with the soldiers of Lord Rama, Lov and Kush were able to capture Hanumana. Taking him to be an ordinary monkey, they tied him to a tree and went to meet Sita. It is said that tree, to which Lord Hanumana was tied was located where the temple stands today.

The temple has a very big idol of Lord Hanumana. It is believed that the Lord, who is immortal, visits the temple daily and grants boons to anyone who visits this temple daily. It also houses an idol of Lord Shiva. There is also a separate room for recitation of Ramayana and singing of devotional songs. 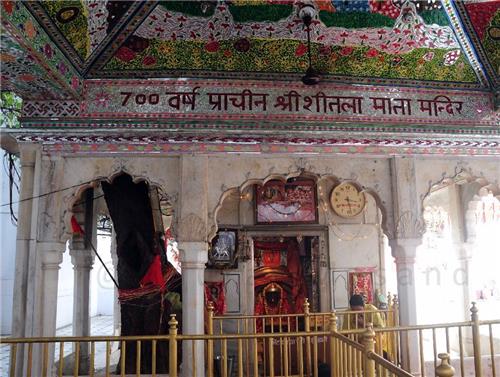 The Shitla/Sheetla Mata Temple is more than 700 years old and is dedicated to Devi Durga. Because of this temple the complex is known as Durgiana Tirath.  This temple has an idol of Devi Durga, her Bahana the Lion and also a Shiva Linga. Behind this temple is an old beri tree, which remains green throughout the year. Devotees come here to get rid of different diseases. Navaratri is a special festival here and thousands of devotees visit this place during that period. Rooms have been erected near this temple for sages to stay. 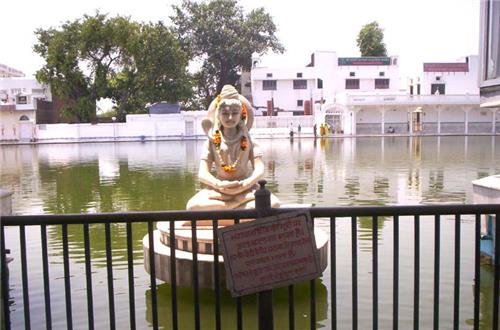 It is customary to take a parikrama of the Durgiana Tirath. For that purpose a path has been built round the sarovar. It is 7 yards wide and 700 yards long. The parikrama starts at the right side of the main gate. First there is a shiva temple; then you come across a bathing ghat for the ladies.
Then you have the temple of Sat Narain, Virat Sawroop of Lord Shri Krishna and Hanuman Ji etc.  Temple of Tulsi Das and Ved Katha Bhawan come next. These two buildings have a sitting capacity of 1000 devotees each. Last on the line is the Langar Bhawan. It has the capacity to serve 250 devotees at a time.


Other Facilities at Durgiana Tirath

This temple complex is run by a registered society called Durgiania Committee.  All major Hindu festivals are celebrated here. The committee also takes up many welfare projects and runs a number of collages. It also runs a dharamshala and a langar for the devotees. Therefore, if you decide to stay here you may contact the authorities at: